The security and privacy of customer data is a core priority for Azure and Windows. Encrypting data across different layers of device and transport is a universal technique to prevent exploits from accessing plaintext data. In Azure, we have a multitude of offerings to provide different levels of data confidentiality, encryption and isolation across workloads types (Azure Confidential Computing – Protect Data In Use | Microsoft Azure). One of such is VM memory encryption with Intel’s Total Memory Encryption – Multi Key (TME-MK), providing hardware accelerated encryption of DRAM. With the latest Intel 12th Gen Core CPUs (Alder Lake) offering this capability, we are delighted to extend support in Windows 11 22H2 for TME-MK.

Encryption has long been an established mechanism to keep data from prying eyes. By encrypting data while it is at rest, in transit, and in use – we can prevent unexpected parties from getting access to sensitive information for the lifetime of data.

Windows 10 introduced Bitlocker to encrypt data while it is residing in persistent storage, ensuring that a stolen laptop does not result in exposure of customers’ saved files on disk. Attackers continually get more sophisticated and mount physical attacks to retrieve data from volatile memory mediums (i.e. DRAM). One example is using methods to cryogenically freeze memory which enables data to persist for long periods of time. Another example is setting up interposers which sit between the DRAM chip and the DRAM slot.

It is logical to extend cryptographic protection of data while it is in memory, but it is expensive to do entirely in software. In modern CPUs, hardware-accelerated capabilities (Intel Total Memory Encryption) are used where the memory controller encrypts data before it is committed to the DIMMs, and decrypt data when needs to be computed on. Having memory controller-accelerated encryption also has a nice property where workloads do not need to be specially modified to take advantage of this, and the operating system and hardware can transparently handle these operations.

Memory controller-based encryption prevents attackers who have physical access to DRAM from being able to read in-memory contents in plaintext. TME-MK extends that paradigm by enabling different VMs (partitions) to have unique memory encryption keys. 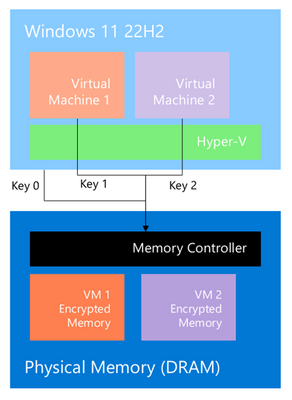 To boot a new VM with TME-MK protection (assigning it a unique encryption key from other partitions), use the following PowerShell cmdlet:

To verify a running VM is enabled and using TME-MK for memory encryption, you can use the following Powershell cmdlet:

The following return value would describe a TME-MK protected VM:

Underneath the hood, the operating system will request the CPU to generate an ephemeral key (for the duration of the VM lifetime). This key will never leave the CPU (and not be visible even to the operating system or hypervisor). The hypervisor will then set the associated bits in the second level page tables (SLAT) describing the physical addresses associated with the VM that should be encrypted with said key by the memory controller when data moves to and from memory.

The privacy and security of customer data is top of mind for Windows 11. Windows will continue to evolve and adopt modern defense-in depth capabilities to continue protecting our customers. For more information on Intel TME-MK, read Intel’s latest whitepaper: https://www.intel.com/content/www/us/en/architecture-and-technology/vpro/hardware-shield/total-memor... 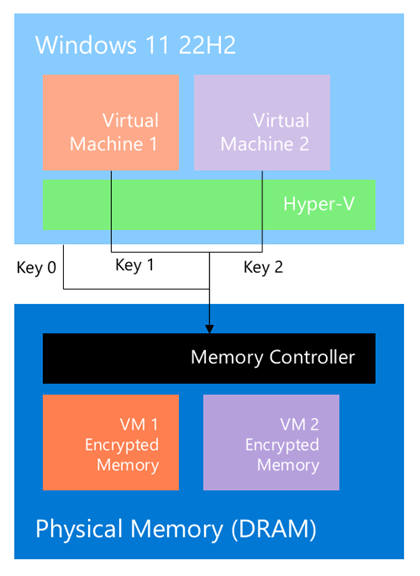 The security and privacy of customer data is a core priority for Azure and Windows. Encrypting data across different layers of device and transport is a universal technique to prevent exploits from accessing plaintext data. In Azure, we have a multitude of offerings to provide different levels...
techcommunity.microsoft.com

That's very interesting. Reading the article states only 12th gen Alder Lake processors, so only on newly built/bought PCs. PC's such as my fully Windows 11 compliant i9 system (system specs) wouldn't qualify due to processor limitation